I was just wondering if there are many people from this community who might be going to the AoIR conference next week in Brisbane?

Or.. do all the real internet studies academics keep "real blogs" and not el-jays? heh.. ;)

...I apologise if this post lowers the tone of the community. :/
Ilyrias, the Aegadian Isles is set in a world unlike any other. Carlean scholars have recently unlocked the system of the world, giving them unprecedented control over the forces of nature. Though some denounce this new science as magic and heretical. Meanwhile the Alberen natives in the south fight to keep their homelands safe from the destruction wrought by the Carleans "progress" and unrelenting expansion. Utilizing the ancient techniques of spirit conjuring and runelore, they present a formidable foe for any enemy of the Ianai forest.

We are currently accepting applications for builders!

Interested parties should send an e-mail to applications@persistentrealms.com with the following information:

- Your name and age (You must be 18 or over to apply)
- Your experience with MUDs, including time spent as a player, builder, immortal, or admin
- A sample of your writing. This should be in the form of room descriptions (please no more than 10) plus a single item description of some kind of steam-punk gadget that might be appropriate for the Ilyrias theme.
- And anything else you think we should see

----
Persistent Realms LLC Development Team for Ilyrias, the Aegadian Isles.
Contact us via comments or visit our forums.

http://www.gamespot.com/features/freeplay/index.html?story=6143220
i notice that this hasn't been posted in this community yet and might interest some people:

IR 7.0: INTERNET CONVERGENCES
International and Interdisciplinary Conference of the Association of Internet Researchers

The Internet works as an arena of convergence. Physically dispersed and marginalized people (re)find themselves online for the sake of sustaining and extending community. International and interdisciplinary teams now collaborate in new ways. Diverse cultures engage one another via CMC. These technologies relocate and refocus capital, labor and immigration, and they open up new possibilities for political, potentially democratizing, forms of discourse. Moreover, these
technologies themselves converge in multiple ways, e.g. in Internet-enabled mobile phones, in Internet-based telephony, and in computers themselves as "digital appliances" that conjoin communication and multiple media forms. These technologies also facilitate fragmentations with greater disparities between the information-haves and have-nots, between winners and losers in the shifting labor and capital markets, and between individuals and communities. Additionally
these technologies facilitate information filtering that reinforces, rather than dialogically challenges,'narrow and extreme views. 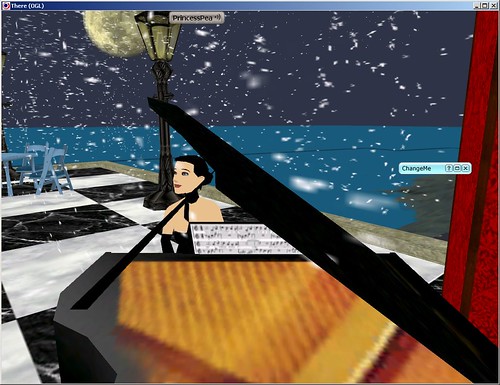 Seated at the piano at my paz (port-a-zone) that used to be in the sky over the Tyr boneyard. I always loved the moon and the stars here. I think this was sometime around last Christmas since there is snow falling.

Hi, all. This is a cross-post from my journal. I will be making these kinds of posts there regularly so feel free to add me and follow along.
http://www.livejournal.com/users/rayne_vandunem/37180.html

I'm probably repeating myself again - The blogging interface on most blogs - is frustrating in that it centers the monologue.

In livejournal an illusion of conversational interactivity seems at least possible - but the organization of conversations becomes inefficient there too (which is why I suppose the "friend cut" happens - when someone is trying to do a sort of "spring cleaning" on their LJ...)

Anyways - Like T. S. said at the precon in aoir - it took 5 years for researchers to actually begin to examine LJ - but is this perhaps also generational?

Can one experience LJ cyber-ethnographically if one is old enough to be an academic producing what is officially recognized as "research" - who lives there?

Anyone care to discuss this?

i'm thinking of starting an encyclopedia nerdaica which would use a wiki to chronicle the cultural/social history of the internet as it happens. it would basically be a serious version encyclopedia dramatica (cuz the internet is serious business ;) or a meta archive.org

what do you think? would you contribute? is someone already doing this?

our goals include directly supporting
Avatars and multi-user virtual spaces

my question for this LiveJournal community is
what sort of tool(s) would be the most valuable to people
to support individuals constructing their own spaces?

so
what tool(s) do the members of this "group" think
would best serve the "newbie" or somewhat "casual" user/constructor
of 3D virtual environments??

jeffs
hi folks....really glad to see there's a comm for this exciting area of web development. These are crucial times for global communication and interaction. Glad to be a part of it! ....Check out this quick summary i've done of current online systems that are available: